A Bean and a Crumpet were in the smoking room of the Drones Club having a quick one before lunch, when an Egg who had been seated at the writing table in the corner rose and approached them.

‘I am writing a strong letter to the Committee,’ explained the Egg, ‘drawing their attention to the intolerable … Great Scott!’ he cried, breaking off. ‘There he goes again!’

from Eggs, Beans and Crumpets 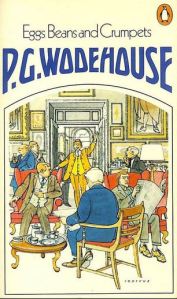 When I started this Weekly Wodehouse wheeze, I had a vague idea of quoting a little bit of ‘his master’s voice’, to share with Plum lovers and newcomers alike, followed by a few short words of my own, expanding on the theme – a chance to develop my own writing.

Re-reading Wodehouse for suitable quotes, I’m struggling to contain myself to quoting just a paragraph… or two. Wodehouse may be quotable, but it’s infernally difficult to draw a firm line and stop quoting. Today for example, I have been reading ‘All’s Well with Bingo’ from Eggs, Beans and Crumpets, which opens as quoted above. It continues as follows:

A spasm contorted his face. Outside in the passage a fresh young voice had burst into a gay song with a good deal of vo-de-o-de-o about it. The Bean cocked an attentive ear as it died away in the direction of the dining room.

‘Who is this linnet?’ he inquired.

‘Bingo Little, blast him. He’s always singing nowadays. That’s what I’m writing my strong letter to the Committee about – the intolerable  nuisance of this incessant heartiness of his. Because it isn’t only his singing. He slaps backs. Only yesterday he came sneaking up behind me in the bar and sloshed me between the shoulder blades, saying “Aha!” as he did so. Might have choked me. How many “s’s ” in “incessant”?’

He returned to the writing table. The Bean seemed perplexed.

‘But he’s married. Didn’t he marry some female novelist or other?’

‘That’s right. Rosie M. Banks, authoress of Only a Factory Girl, Merveyne Keene, Clubman, ‘Twas Once in May, and other works. You see her name everywhere. I understand she makes a packet with the pen.

‘I didn’t know married men had any joie de vivre.’

And this is just the beginning.What can I add to the conversation, once Wodehouse has woven his magic? Better to sit back and enjoy.

4 thoughts on “An Egg, A Bean and a Crumpet”