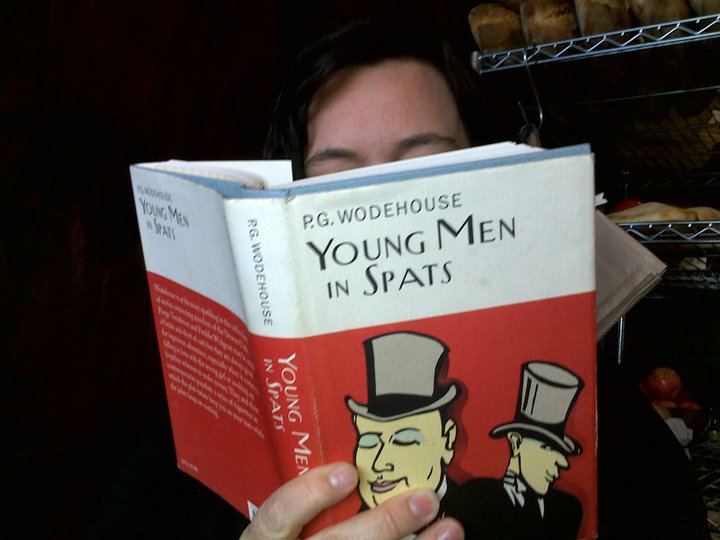 This piece began as a story about my search for Sebastian Faulks’ new book ‘Jeeves and the Wedding Bells’ in my local bookshop. With the giddy excitement of a school girl, I had rushed forth to purchase my copy, but found things less straightforward than expected. The book was not filed under ‘F’ for Faulks as is, I believe, customary. Nor was it among the new releases. But after some first rate detective work, and much tut-tutting under the breath, I discovered the bally thing in the ‘humour section’, under ‘W’, next to Wodehouse.

I greatly dislike finding Wodehouse in the ‘humour section’, filed among the joke books, cartoons, mediocre comedy memoirs, and other bilge produced purely as a money-making exercise. P.G. Wodehouse was an exceptional writer, widely acknowledged as one of the best, who more than earns his place on the shelf between Winton and Wolfe. I’ve never read anything else by Faulks, but I believe he deserves the same courtesy.

Sebastian Faulks is a living – even youngish – modern writer. In his thoughtful introduction, Faulks tells us he is a Wodehouse fan and explains his reasons for not attempting ‘too close an imitation’ of the original. He also echoes the view of many Wodehouse’s enthusiasts in wanting to introduce Wodehouse to a younger audience.  These comments gave me cause for great anxiety about the work to follow, because I had heard them before, not so long ago….

Cast your mind back, if you will, to January 2013. I was giddyish with excitement yet again, leaping about in my chair like a breaching whale, as the long-awaited first episode of the BBC’s Blandings series went to air. There was every reason be hopeful, after two excellent Wodehouse adaptations in the 1990s (Fry and Laurie’s ‘Jeeves and Wooster‘ series, and the 1995 BBC telemovie Heavy Weather), as well as the much-loved 1970s Wodehouse Playhouse with John Alderton and Pauline Collins. When you have such great original material as Wodehouse to work with, it’s surely hard to go wrong.

Unless, of course, you decide that Wodehouse needs a bit of ‘freshening up’ for a younger, modern audience.

I’m not sure who this modern target audience includes, but if the 2013 Blandings series is an indication, it doesn’t include Wodehouse fans. Within five minutes, my hopes were shattered. After ten minutes, I turned off (actually, I popped the 1995 Heavy Weather television movie on instead). Over the coming weeks, the Wodehouse forum I frequent online was inundated by the similarly disappointed. Blandings wasn’t Wodehouse – it fell flat, and has unfortunately confirmed some people’s erroneous impressions of Wodehouse as a trivial writer of upper class twits. I’m yet to come across anyone who has discovered the joy of reading Wodehouse through this series.

It pains me to disagree with Faulks or anyone else wanting to spread the joy of Wodehouse, but I believe this policy of adapting Wodehouse for a younger audience is misguided.

Firstly, it’s important to recognise that Wodehouse already has a healthy following among young readers. They may not be as visible or as well known as the more eminent members of our fraternity, but they’re out there, raiding the bookshelves of friends, relations, libraries and booksellers, and quietly getting on with the job of reading them.

In researching this piece, I posted a question to members of the very active Wodehouse fan group in Facebook. Within the first half hour, I received more than twenty enthusiastic replies from young Wodehouse fans. Many had been introduced to Wodehouse early in life by their Wodehouse loving families. The thread quickly expanded, with replies from more young readers, as well as  wonderful reminiscences from older readers, recalling how their love of Wodehouse began at a tender age – although nothing beats the delight of an older person discovering Wodehouse for the first time. The Facebook fan page is a terrific forum, connecting readers of all ages from around the globe. Age is irrelevant. We are all joined in happy union by our love of Plum.

But perhaps my biggest objection to this mania for young audiences is the personal slight. It implies there is something slightly amiss with the rest of us – Wodehouse’s dedicated, but slightly crustier fans. The ‘oldest members’ among our ranks should not be passed over. Many give generously of their time to help other readers understand the context of Wodehouse’s many references, quotations and cultural elements that might otherwise be lost to us. And projects such as the Wodehouse annotations are critically important.

There is nothing to be gained – and much to lose – by continuing to overlook, disappoint and take for granted P.G. Wodehouse’s loyal readers in the quest for new ones.

If the stories coming through to me on Facebook tonight (almost 50 of them now) are any indication, when it comes to introducing Wodehouse to new readers, it is the fans who are putting in the bulk of the spadework, spreading largess to friends and family in our wake. We deserve better than Blandings – and so do potential new readers.

But we Plum lovers are also an obliging sort, always happy to indulge the next effort with an open mind, which brings me back to where I started – with Faulks’ introductory remarks. It is time to stop speculating, and start enjoying Jeeves And The Wedding Bells. I’ve taken a blow, but my hopes are not dashed.

28 thoughts on “Introducing Wodehouse to a modern audience”