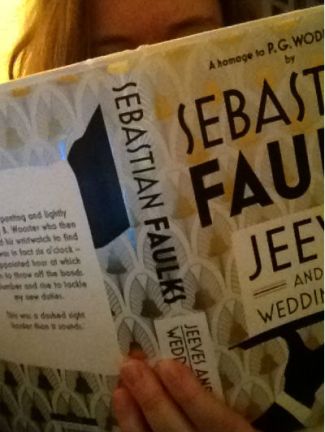 Don the sponge-bag trousers and keep a customary fish slice at the ready. Bertie Wooster, it seems, is finally getting married.

Last month, as you may know if you follow the goings-on at Plumtopia, I purchased a copy of Jeeves and the Wedding Bells by Sebastain Faulks. Finally, after two abortive attempts, which degenerated into rants on other matters, I have finally set about reviewing it. Or at least, it’s a review of sorts. I’m very much a novice reviewer, and although I ‘read as a writer’, it’s as an unpublished writer whose bottom drawer is full of bilge that couldn’t, even at its best, be described as literary.

But as every amateur modern writer knows — anyone who has attended a writing course, weekend workshop, or flicked through a book on writing — ‘good writing’ must grip and sustain the reader, and involve all the senses. The modern writer’s mantra is ‘show, don’t tell’, and Faulks is very much a modern writer. By page two of ‘Jeeves and the Wedding Bells’ Faulks (or rather, Bertie) has described:

By page three, we’ve had details of Bertie being woken by an alarm clock, walking to the bathroom, bathing, dressing, and walking to the kitchen. Faulks draws us into Bertie’s multi-sensory experience, showing and not telling, and does the best he can along these lines without sounding too un-Bertie like. It would presumably go against all Faulks modern writerly instincts (or his editor’s) to do otherwise. However, I found these introductory pages jarring, and by page four, I was close to despair. Bertie Wooster is not a modern writer. This is not his voice.

Then, two-thirds of the way down page five, Faulks give us the goods:

But hold on a minute. I see I’ve done it again: set off like the electric hare at the local dog track while the paying customers have only the foggiest idea of what’s going on. Steady on, Wooster, they’re saying: no prize for finishing first. What’s this buttling business, and why the assumed names?’

A Bertie-like voice has finally broken through, and once he takes over, Faulks never looks back. I had few complaints from here on, and frequently found myself enjoying the ride. In terms of the plot, all the elements we expect from a Bertie and Jeeves story are there:

Faulks also bungs in many of the optional extras, including a burglary (with Bertie cast as the unwilling burglar), a village concert, a sporting match, and at least one scaly Aunt who is well drawn in the Wodehouse style.

‘I have received intelligence from the Hall, sir, that a further house guest is expected this afternoon.’

Even on such a sunny morning I felt a shudder run through the lower vertebrae. ‘What on earth brings that preying cannibal to Dorsetshire?’

‘It appears she is an old school friend of Lady Hackwood, sir.’

I found the mind boggling a bit. ‘It’s hard to imagine that particular schoolroom, isn’t it Jeeves?”

It does lie, sir, at the extremity of one’s power to conjecture.’

‘Had old Isaac Newton done his stuff by then do you suppose?’

It is here, in the dialogue that Faulks does his best work in capturing the Wodehouse style. In terms of plot, Faulks is far kinder to Bertie than Wodehouse ever was; there are no threatening entanglements with unsuitable females; no Spodes or Stiltons waiting to scoop out his insides. The main danger Bertie faces is being unmasked as an imposter at Melbury Hall, where he is passing himself off below-stairs as a Mr Wilberforce, Lord Etringham’s man. Unusually, it is Jeeves who takes the risk, assuming the part of Lord Etringham and accepting Sir Henry Hackwood’s invitation at the hall. This requires a leap of faith from seasoned Wodehouse readers, who are accustomed to Jeeves contriving for all the risk to be taken by Bertie.

When Bertie and Jeeves are finally unmasked, there is no scene. All the rough stuff happens off stage. The real Lord Etringham is unexpectedly announced at dinner, and Bertie dashes off to his lair below stairs until the housekeeper Mrs Tilman informs him the crisis has passed. When Bertie greets Sir Henry Hackwood again, his host has nothing more cutting to say than ‘Ah, Wooster, glad to meet you properly,’ making Sir Henry one of the few imposing patriarchs in Bertie’s life to express pleasure in his presence. These are minor complaints however.

The big departure from the traditional Wodehouse plot is the romance between Bertie and Georgiana Meadowes. It starts on the Côte d’Azur, but unlike Bertie’s holiday romance with Pauline Stoker, it does not end with a hasty proposal. Bertie confides in the reader that he feels unworthy of her, although it is increasingly clear to us (if not Bertie) that both Jeeves and Georgiana are in favour of a union. The story concludes with their engagement happily settled, in a manner that suits Jeeves’ own matrimonial plans.

Bertie Wooster was never in danger of being married while Wodehouse was at the helm. Having married off earlier creations Psmith and Ukridge, Wodehouse knew marriage would irrevocably alter the Jeeves and Wooster adventures (although he did handle the married life of Bingo Little exceptionally well in a number of short stories). With Wodehouse now departed and Faulks presumably not intending further installments, Bertie is finally at liberty to settle down. But the idea still seems strange to us and I, like Aunt Dahlia, won’t believe it until he has donned the sponge-bag trousers and collected the fish-slice in person.

There are other criticisms one might make. Faulks never quite shakes the habit of attempting rich, literary description, poor chap, and however hard he tries, he’s not Wodehouse. Indeed, he has been criticised by purists in our ranks for writing the book at all, and many fans refuse to read it. From my perspective, as someone who has read every word of Wodehouse I could get my hands on until the supply has given out, I am grateful for something new. It may not be Wodehouse, but Faulks has made a fair attempt in the right spirit, and it brought a smile to the lips.

13 thoughts on “Jeeves and the Wedding Bells: A Review”