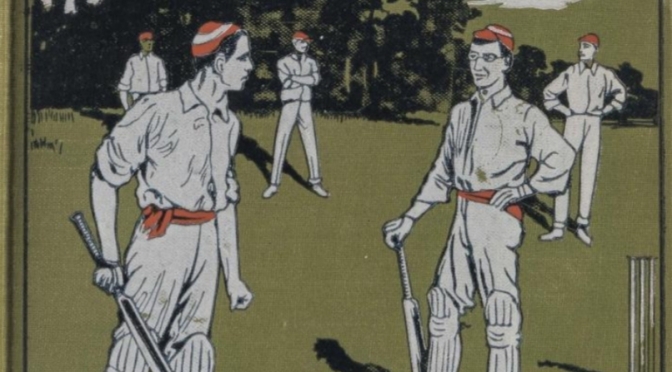 There are many ways of inviting a person to seat himself. The genial ‘take a pew’ of one’s equal inspires confidence. The raucous ‘sit down in front’ of the frenzied pit, when you stand up to get a better view of the stage, is not so pleasant. But worst of all is the icy ‘sit down’ of the annoyed headmaster. In his mouth the words take to themselves new and sinister meanings. They seem to accuse you of nameless crimes, and to warn you that anything you may say will be used against you as evidence.

Admiration for the works of P.G. Wodehouse is not a competitive sport. The merest whiff of appreciation for The Code of The Woosters, one of Wodehouse’s most popular novels, will be sufficient for other Wodehouse fans to scoop you lovingly into the fold. For as Wodehouse once wrote: ‘There is no surer foundation for a beautiful friendship than a mutual taste in literature” (‘Strychnine in the Soup’ in Mulliner Nights)

However, a knowledge of Wodehouse’s school stories – written, as the name suggests, for younger readers — will set you apart as a more serious enthusiast.

These books can be read in any order. If you’re not a fan of the genre, I suggest starting with Mike and Psmith, starring Mike Jackson and Rupert Psmith (the ‘p’ is silent as in pshrimp). I love this story so much that I included it in my top five Wodehouse books.

Notes on the series

P.G. Wodehouse began his writing career at a young age. By his own account:

From my earliest years I had always wanted to be a writer. I started turning out the stuff at the age of five. (What I was doing before that, I don’t remember. Just loafing, I suppose.)

As a student at Dulwich college, Wodehouse edited the school magazine, The Alleynian, and received his first payment for writing in 1900 from Public School Magazine for a piece on ‘Some Aspects of Game-Captaincy’.

Wodehouse fans will detect a hint of the autobiographical, even in these stories.

It is a splendid thing to be seventeen and have one’s hair up and feel that one cannot be kissed indiscriminately any more by sticky boys and horrid old gentlemen who “knew you when you were that high, my dear,” or who nursed you on their knees when you were a baby. When I came down to dinner for the first time in a long frock and with my hair in a bun there was a terrific sensation. Father said, “My dear Joan!” and gasped. The butler looked volumes of respectful admiration. The tweeny, whom I met on the stairs, giggled like an idiot. Bob, my brother, who is a beast, rolled on the floor and pretended to faint. Altogether it was an event. Mr. Garnet, who writes novels and things and happened to be stopping with us for the cricket, asked me to tell him exactly how it felt to have one’s hair up for the first time. He said it would be of the utmost value to him to know, as it would afford him a lurid insight into the feminine mind.

I said: “I feel as if I were listening to beautiful music played very softly on a summer night, and eating heaps of strawberries with plenty of cream.”

The Wire-Pullers (A Cricket Story)

Wodehouse’s knowledge of sports and literature, popular culture, history and classics is evident throughout the early stories – and is worked into his writing with the same seamless genius we associate with his classic works.

Mike nodded. A sombre nod. The nod Napoleon might have given if somebody had met him in 1812 and said, “So, you’re back from Moscow, eh?”

In the context of a long literary life, Wodehouse’s school-story period was short-lived. His first novel for adult readers, Love Among the Chickens, was published in 1906 and introduced his most scandalous ‘old-boy’, Stanley Featherstonehaugh Ukridge. Wodehouse’s transition from writing school stories to writing for adults included novels featuring Mike Jackson and Psmith as adults, and using a boys’ school as the setting for The Little Nugget (1913).

Some critics have argued that Wodehouse and his writing, never ‘grew up’ at all — that the characters in his stories think and behave much like school children in adult clothing. As George Orwell put it:

Mike Jackson has turned into Bertie Wooster. That, however, is not a very startling metamorphosis, and one of the most noticeable things about Wodehouse is his lack of development.

There’s some truth to this, but rather than a point of criticism, I believe it’s one of the magic ingredients that make’s Wodehouse incomparably special. Despite becoming a master of his craft, Wodehouse’s writing is never weighed down by seriousness — he never loses the youthful spring in his step. In a life that was not without its hardships, this is remarkable, and wonderful.

The school stories are an important part of understanding Wodehouse’s place in the world of literature, as well as enjoyable reading. I recommend them highly.

Many can be viewed in their original magazine format via the excellent Madame Eulalie’s Rare Plums, a site devoted to the early works of P. G. Wodehouse.

More in this series:

My thanks to fellow Wodehouse fans and friends who continue to make Plumtopia possible.

The world of P.G. Wodehouse

The Mind and Musings of a Scatty Chap

Discussions about books and everything that is lyrical in literature

EARLY DAYS OF A BETTER NATION

All The Vintage Ladies

Tea, Books and Other Parts of Life

Human, all too human

Thoughts of a welsh brummie.

A Place for Global Citizens and Polymaths

What Shall We Talk About Today?

Anything and everything under the Sun

Food, Wine, Sport, Politics, Gossip, the Arts - what else is there!

Nerdy about history, archaeology, museums and crafts in Northumberland

A Book Club with a Difference

I'm Tired
Into The Forest Dark

Where lapdancing gastropods can mingle with minor deities

A blog on books and other things literary

Come on down these mean streets...

really (not) a runner

rambling about my running journey

Learning from the Past